Skip to content
Todd Corayer, the Fish Wrap Writer fresh water fishing, sarcasm with a chance of humor May 7, 2015 4 Minutes

Opening day of trout season this year was tough for many, easier for a few.  Spring fog hung tight until sunrise but the promise of long anticipated warmth did little to coax fish to the bait. Hundreds fished from boats, canoes, kayaks and very low draft plastic squares. Plenty of folks came from away, standing shoulder to shoulder on the closest piece of shore, where it’s much easier to get a light for your Camel, to cast heavy weights by which to hold scented bait balls on the bottom.  Heaving such long lines apparently requires a special distance and territorial possession exemption because as a father and young son paddled nearby, they were instructed to move out of the way with a cursory and affected “thank you very much”. Such is spring’s greatest day on a busy Barber Pond. Those good people are seldom seen after this day and when the smoke has cleared and those butts have all magically biodegraded, the banks and breadth of pond are open again.

Bringing a net in the canoe was clearly a jinx but our empty cooler was a true result of actions beyond our control. The prior evenings’ rain left a fresh, cold water lens upon the surface which kept hungry fish down. My Al’s Goldfish turned out to be Al’s Gouldfish, which apparently are not related and fished poorly. Dozens of trolling motors left waves of stray current radiating through the shallow waters, bouncing off trout which were trying to feed, leaving them disoriented and unable to find my bait. My son kept getting snarls in his braided line which threw off my focus. Too many cormorants were buzzing my head, having heard of my comments about an open season on them. I can’t cast when other people are watching.

Silver Spring was tepid for the majority, although the Shady Lea area seemed to produce better than the rest. One fisherman said he had a fine day there, taking some 20 nice trout, which is tricky since the limit is 5. RIDEM enforcement officer Mike Schipritt made the rounds, checking for floatation devices without mouse holes, licenses and stamps for those in possession of trout. Officer Schipritt was at Barber last year, although he left briefly for a ride to Cranston with an angler who had both a license and a warrant.  They have a difficult job; they are the ones who check your tree stand, look for plugs in your duck gun and walk up on you while you wade the Wood just as you swear you almost had that giant native brookie. Much like the Coast Guard, these are the people you don’t want to see until you need them and then they can’t get there fast enough to make most happy.  A tip of the camo hat to them.

The real star of opening day was a young Cole Hosey. Cole landed a beautiful trout with colors matched only by the smile on his face and could not have been more proud to show off his catch. He has fished opening day for a few years with his dad, casting like a natural from their boat. Based on how tightly he held that trout and how much he knew about fishing, this young man will be out-catching lots of us in years to come. 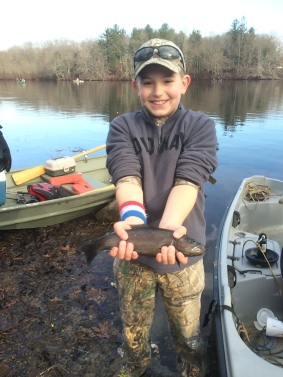 This past Tuesday, Rep Filippi held a State House hearing to discuss his House Bill 5352, which once was to repeal the salt water fishing license based on it being wholly unconstitutional but for now has been amended to reduce the price from $7 to $3. This is the permits true administrative cost; the other $4 goes into a restricted account to directly benefit recreational fishing, thanks in large part to the strong efforts of the RI Saltwater Anglers Association. Rep. Filippi agrees the monies are well spent and acknowledges that each dollar is matched with three from the federal government but it is still an unconstitutional tax on recreational fishing.

In the words of Rep. Filippi, “Our state had a duty to stand up for its citizens and seek a declaration in federal court that the federal government does not have the authority under the United States Constitution to force Rhode Islanders fishing in Rhode Island state waters to purchase a license.” An argument can be made that Rep. Filippi is right, that he is acting in our overall best interest and that in a common sense system, he would win such an argument. However, there are two real dams in his path.  Rep. Joe McNamara believes we have not fared well when challenging the federal government and in fact, “the last time we did was when we burnt the Gaspe.”  The other is that he has little support from his citizens or fishermen and even with the benefit of having “lots of zeal” and the right intentions, his challenge has the makings of a very long struggle.

This state taxes its people into the ground then asks for more when they can’t budget for what they already took but here are voices demanding a fee actually be continued. It’s a unique moment in state politics, it’s a Twilight Zone episode where the people are arguing for the right to be taxed, the committee can’t stay in the room long enough to hear the people and the star is a politician who wants to abolish the tax but agrees with its benefits. Some people create their own storms and then get upset when it rains but here, Rep. Filippi seems in it for the long haul, to listen to all arguments and convince us of his higher goal. It’s up to us to let him know how we feel about his storm.

Todd Corayer is a life-long fisherman who lives not far from the Saugatucket with his wife, who supports his fishing mainly to get him out of the house and a young son who regularly catches more fish than him.