Great clouds of sand eels continue to envelop Block Island’s west side. There is talk of bonito off Sakonnet Point, muskies in New Bedford, big fluke off of Jamestown and keeper stripers atop Hope Island. This week starts fishing at its best, we hope, and maybe some runs to the canyons but on Sunday, the real action was over on South Kingstown’s Worden Pond, where regional BASS anglers took to their Rangers and Skeeters for some competitive largemouth bass fishing.

For the Rhode Island Bass Nation, this was their third trail event this season. Eighteen boats, each with two members, registered to fish for prize money and points on as perfect a day as a fisherman could imagine: calm winds and clear skies over a skin of pollen and fish rising up for early morning bugs. Fishermen came from all over our state as well Massachusetts and Connecticut for this event and there were some seriously beautiful boats working the pond. For the unfamiliar, our state federation of the Bass Anglers Sportsmen Society is a sanctioned chapter with a mission to promote responsible fishing, the many positives of bringing young kids into the sport, the benefits of catch and release, all while participating in contests and environmentally-oriented community events. 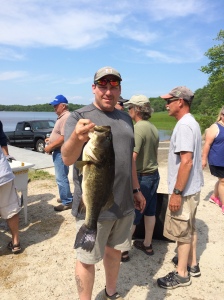 They compete throughout the region and the next stop for them is Wattupa Pond in Fall River on July 12. Aptly named as its native translation is “place of boats”, the northern end is reserved as a water supply but the south section holds large and smallmouth bass, crappie and a close cousin of the fish of a thousand casts, the tiger muskie. Who knew?

At the weigh in, Jay and Mark ran the show, recording the catches before all were safely returned to the waters. Several bass came in at a respectable five pounds but most anglers acknowledged the fishing was difficult and slow almost all day, yielding lots of small fish. The cool clear, picture perfect morning apparently kept some fish down and as Ron Larivee explained, “We caught most of the fish later in the day”.  Boats worked the edges and weed piles of Worden and without giving up any deep secrets, soft baits like crawfish and worms seemed to be favored. The team of Mike and Chris Shiels took third place with a total weight of 21.05 pounds, while second place went to Ron Bestwick and Ron Lavoie who weighed in an impressive 24.13 pounds. Ron and his wife Terri are also very involved with the youth divisions, where 38 kids in three age groups get to compete as well.  One of the very young fishermen who was just observing and not participating this day, was recently crowned Mr. Bass. What’s more cool than that?

On top of the leaderboard were Ron Larivee and Steve Conde of the Northern Rhode Island Bass Anglers, who not only beat out the other boats with a total weight of 25.04 pounds but they also weighed in the largest single fish at 5.54 pounds. This win comes after a third place finish on May 9 at Watchaug Pond. Most teams, like the duo of Joel St.Germain and Frank McCormick of the Bass Bums team, who delivered a bag weighing 19.77 pounds, landed bass in the three to five pound class, with total bag weights in the twenty pound range.

It’s easy to over-focus on the state’s rich saltwater species but we are equally blessed with hundreds of freshwater ponds and lakes teeming with bass, perch, pike, pickerel, salmon and walleye. A tip of the camo hat to the Rhode Island Bass Nation members, a group of real gentlemen fishermen who caught some serious fish, were gracious with their winnings and have a genuine interest in keeping the younger kids involved; they understand memories are not made playing video games.

Over on Block Island, where salt water can make almost anything float, except an excavator, Sol at Twin Maples reported that squid fishing has been irregular on the island, just like it continues to be around here. He also mentioned huge schools of sand eels are surrounding the west side and this time, it looks like there are bass and blues with them. While the fishing so far has continued to be spotty, Sol feels that, “This is the week when it will really turn on”. One boat of fluke fishermen reported landing something like 50 fish near the entrance to New Harbor, with the bulk of them spitting up guts full of lances. That’s a really strong sign those big bass may be right around the corner. And by that corner I mean Charleston Beach.

A few months ago we introduced you to James Corbett over at Brown University; he’s the guy working on tracking jellyfish in local waters. So far there haven’t been many around, given our relatively cool water temperatures, just a few Stinging Sea Nettle, Lion’s Mane, Moon, and Comb jelly’s. He has however, noticed that the upper bay has been well oxygenated, which means less jellys but for fishermen, that can mean more menhaden, which might just mean more bass, which is where fisherman Captain Bob Masse reported catching two bass, both over thirty-five pounds. If you see any while out fishing, he has a cool app to help him record their location, which can be found at the Apple store at “collector for ArcGIS”. A few minutes on the steam home will give him some helpful info about our waters’ health.

South facing beaches have been blanketed with weed for days, thanks to a steady south and southwest fetch, which has slowed the surf casting. The good thing is the weed can get sucked back out just as fast. South County local Greg Vanasse landed one of those elusive big stripers in Narragansett Bay this week, fishing just above Hope Island. Greg fishes on Joe Jollis’ boat, “Hass” and assured me the fish was photographed and released.  Based on that picture, it looks like Team Haas is off to a great start for the tournament fishing season. Bass, blues, fluke, tuna, largemouth, smallmouth, pike; the season has really begun here and it’s not all just in the salt water. 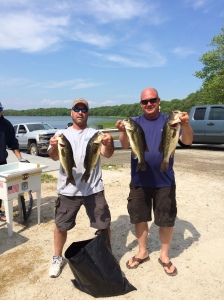