Last year, I had the pleasure to meet Mike Lee, a small business owner from Maine who was promoting his fishing products at an outdoor writers meeting. He’s an engaging guy and we had much in common.  A few days ago, we talked for a very long time about his company, family, lures, ambitions and hopes for this new year. Mike has vision.

He was Senior Director of Accounting for a multinational company. He managed CPA’s while attending business meetings in countless countries. He traveled constantly. On an average year he might fly 75,000 miles, frequently to the Far East. “Hong Kong is 16 hours from Chicago”, he sighed, reflecting on so many hours in the sky. “The first time you go it’s fun. The second time it’s work.” 16 hours is a few cocktails, two movies and repeat bouts of leg cramps. Mike was successful, “as a business guy in an accounting group” but all the while, independence was calling. After years of researching, he found the right business, on Craigslist of all places and now Mike Lee is the very proud owner of Al’s Goldfish Lure Company, the classic that’s caught a million trout.

He bought a serious piece of American sporting history that had faded a bit. Back in the day, tackle boxes, those clunky two-tone brown plastic rigs with divided drawers all gummy from withered purple rubber worms likely held a nip of Old Grand Dad with a faded tax stamp and several Al’s Goldfish lures. It’s outline has a childish simplicity but that particular bend and curve made it a classic wobbling swimmer perfect for drawing strikes from not just trout but freshwater fishes like bass, perch, walleye and pickerel. 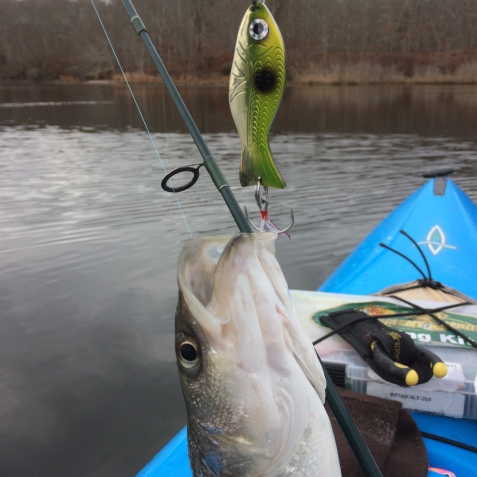 Sporting goods store owner AL Stuart pounded out the first curvaceous goldfish spoon in 1954 before wisely partnering with Rosco Vernon “Gadabout” Gaddis, host of “The Flying Fisherman”. Those were pre-Nielsen ratings and internet cookies days so in between bits, Gadabout would promote Stuart’s creation at no cost as a means of seeing who was watching. It’s so simple. It’s genius. Flutter and wobble. Cast, sink ,troll and receive.

Each action has an equal and perfect reaction. Al’s Goldfish became a sensation.

Mike Lee is a smart guy who can see the bright side of the road. In 1984, Al passed away, the company passed through some hands, parts were shipped in from China. The company foundered. In 2014, Mike ran the numbers, talked with his family and made an offer. It all happened very quickly but he knew it was right. “The one thing me and my son absolutely have in common is that as soon as he could hold a fishing rod, he was fishing. That was the icing on the cake. It’s a family bond”, he said.

One of the big draws was that unlike almost everything else in our kits, the lures are made in the USA, something he’s not about to change. He packed up the inventory from Springfield and moved it to his southern Maine home. The metal is still stamped in Massachusetts, painted in Rhode Island and assembled in Maine where  he watches stripers feed on the tide at the Biddeford mill building where he creates.

“Birth is a lot easier than resurrection”, he reflected. Purchasing a brand name, an icon, something built long before you, is a serious challenge and there’s certainly days Mike might just feel like Sisyphus staring up a giant hill of cheap Chinese imports. So he works his damndest to restore that shine to a lure which rightfully enjoys not just name recognition to a bunch of floppy hat wearing old story tellers, but that consistently catches fish. Field and Stream Magazine recognized it as one of the “50 Greatest Lures of All Time”.

“Sooner or later, everything old is new again”, wrote Mainer Stephen King in “The Colorado Kid”. Now better understanding present and potential customers, he has expanded the line to attract a new generation of fishermen. His Living Lures bear striking resemblance to rainbow and brown trout, perch, mackerel, menhaden and even frogs. Shrewdly combining the invaluable personal touch of hand painted designs with the latest high resolution images, he’s banking that young anglers will put a few in their tackle bags. For saltwater fishermen, Mike has developed series made to catch striped bass and bluefish with that same wobble that sends vibrations right to lateral lines, drawing big strikes. Fishing a one ounce in silver with a small buck tail this fall, a keeper bass inhaled it on only my second cast. 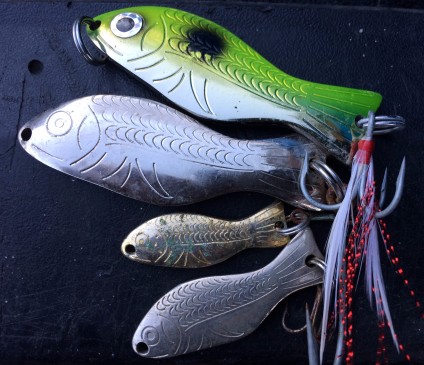 There’s no denying the significance and effectiveness of an Al’s Goldfish. While he uses the internet and social media platforms to promote his line of lures and brag about loyal customers, it’s a double edge sword. “The next generation doesn’t go outdoors”, he lamented, referencing the increasing siren of video games and smartphones combined with stagnant to sagging fishing licence sales nationwide. A recent analysis by the American Sportfishing Association found just an averaged 2.0% increase in license sales over a ten year span with several states showing marked declines. Mike added, “There are all kinds of outreach programs just to get kids outside. Gen Xers and boomers still go outside.”

We can learn a lot from our grandparents, from musty tackle boxes, from a guy named Rosco, from what can still be made in America, from what we dream under a scratchy blue blanket on an all night flight.

If Mike Lee keeps pushing past all that imported plastic, keeps putting shiny Goldfish in tackle boxes, there’s surely a bright future for his company and he’s just the man to see it.