“Blame it on Jerry” was a typical quick response in my younger days, when questioned about some less than ideal decision. Mr. Jerry Garcia was a towering figure to me and since work was not such a priority back then, there was time for fishing or travelling somewhere to see him. Alas, we grow older and now the vices of that psychedelic scene may be partially replaced with the vice or vise, of tying flies and I blame it on Gerry.

Gerry Engel is my wife’s uncle who lives out west, where there’s more trees than people and that’s just fine. He’s an experienced  tyer with an excess of tying materials. He asked if I wanted some. I declined. Flies cost about two dollars and I knew, I just knew, I absolutely knew getting involved with tying flies, as interesting as it may be, was a terribly bad idea and would cost me dearly in the end.

That said, people who love us don’t necessarily listen to us, especially when they believe they know the answer to their question does not always require our involvement.

Some call that wisdom.

“No thank you,” I said. “There’s just no space in my schedule for another hobby,” was my second answer to his first question asked a second time. I’ve seen those people, you know the ones, heads bent over vices, mumbling through fly shops and classes, dirty hats pulled down low, fleece vests covered in dog hair, talking about some single 9/16” strand of sparkle and three turns of yellow 6/0 something or other. At The Bears Den I once yanked my son by the arm to save him from the vices on those tables, fearing he would want to know more and if we could buy some maribou, whatever that was.

“I packed all the shit I could in there and still have some odds and ends I will send along eventually,” Gerry wrote in an email. Truth is, he shipped a handmade cedar chest stuffed to the gills with feathers, hooks, tools, beads, hackle, dubbing and a chunk of what I’m pretty sure is antelope butt. It was the ultimate Pandora’s box of everything fly tying. Bewildered by 47 pounds of oiler puffs, elk hock and thread, I called out for help.

RIDEM’s Kimberly Sullivan and Scott Travers run a really wonderful Aquatic Resource Education program which offers, thankfully, fly tying lessons. For those who grumble, “where do all my tax dollars go?”, the ARE program is 100% federally funded from monies coming from sportsmen and women. To be precise, “Funds are derived from a 10-percent excise tax on certain items of sport fishing tackle, a 3-percent excise tax on fish finders and electric trolling motors, import duties on fishing tackle, yachts and pleasure craft, interest on the account, and a portion of motorboat fuel tax revenues and small engine fuel taxes authorized under the Internal Revenue Code.”

So that’s our money very well spent and that’s that.

Jeff Perry of the United Fly Tyers of Rhode Island led our small group of novice tyers, with me a consistent five minutes behind. As I worked over and cursed over Gerry’s vice, Jeff asked “Are you sure you’re not left handed?” Several times, actually. I’m not, I just couldn’t figure out which way to wind the thread, crooked or arthritic. I was a mess. In a beginner level, read non-judgmental, tying class, the pressure mounted.

“This is a pretty basic pattern, it’ll be easy,” said Jeff. Sweat ran from my temples. The nice Portuguese man across the table tried not to stare at my “fly”, which resembled shredded orange corn husks wrapped with an unraveled shoelace on a hook bent from being ten dozen times reattached to the vice.

He stared. I understood and forgave him.

“Tying is the sort of hobby that starts with a shoe box full of roadkill, hooks and thread and then you find yourself building an addition on the house, trust me,” he wrote.

Exactly as I feared. With so many Jerry Garcia shows still ringing in my poor ears and a nine inch nail sized strand of glittering ostrich ribbon wedged under my fingernail, I lowered my head in defeat. The fly looked like it would go six feet, turn turtle and crash. I Googled “epic fail.” Nobody looked up. “Take your time, there is absolutely no rush. None,” an instructor said. We could all use a little more of that counsel in our daily lives.

This is how it all starts…

I struggled getting several pieces of orange whitetail body hair out of my beard, wondering what kind of deer has orange hair…

(maybe one who digs punk rock like Neutral Nation? I wondered) and slowly wrapped thread unevenly around a hook the diameter of a paper clip. Then Jeff brought out the whip finisher. “What in the hell is that?” I asked without thinking or understanding that the rest of the room was almost done. It’s a brilliant tool invented by Frank Matarelli to finish off a fly, before you apply head cement or push it off the table before anyone sees how you’ve absolutely destroyed a perfectly good 1/0 hook.

Jeff is a patient man, has made this new adventure enjoyable and I’m booked for the next five classes.

I caved, Gerry’s laughing, the nice Portuguese man will probably sit at another table and Jerry’s gone.

One vice slowly trumps another. 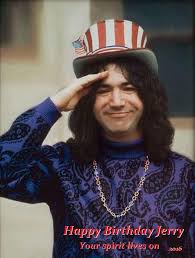 One thought on “The vices of vises, Jerry Garcia and a punk rock deer”