This week we turn the boat around for a second look at some characters and their greatest hits from 2018. What fun.

One of the founders of RI Kayak Bassin’, RJ Alves is a force, to say the least. And it’s all positive. His highlight was the, “First RIKB tourney: saved a tipped angler, broke my hog trough in process, borrowed one from a friend, headed out after rescue was complete, caught a 21” (bass), placed 2nd with one fish!”

Captain Dave Monti needs no introduction but in the interest of space, he’s a charter boat captain, RISAA Executive Board member and excellent writer. He said, “The pleasant surprise this year was the outstanding striped bass shore bite. Many of the fish caught in the wash were school bass, however, there was an occasional keeper mixed in. Fishermen from Watch Hill to Pt. Judith to Narragansett were catching a lot of school bass from the surf with an occasional small keeper to 30” mixed in. The bite went well into November.  With a lot of peanut bunker in the water the school base came in to feed.
The fall tautog bite this year was outstanding. When turbid dirty water from storms cleared the bite was on. Many anglers caught their limit in the early fall season and had no trouble catching five fish when the limit increased. Capt. Mike Littlefield of Archangel Charters caught his personal best, a 15 pound tautog off Jamestown using a tautog jig and green crabs.”

Dave Morton owns Beavertail Rod and Reel. “There were a few outings but the first was on the canal. That morning was foggy and there were unseen fishing breaking in the fog. We casted in the general direction of the mayhem and we pulled several 30 plus inch fish out. A great morning with great company with my fishing buddy Ben. It’s not always about the fish, it’s about making the time to experience what we have around us.” Amen. 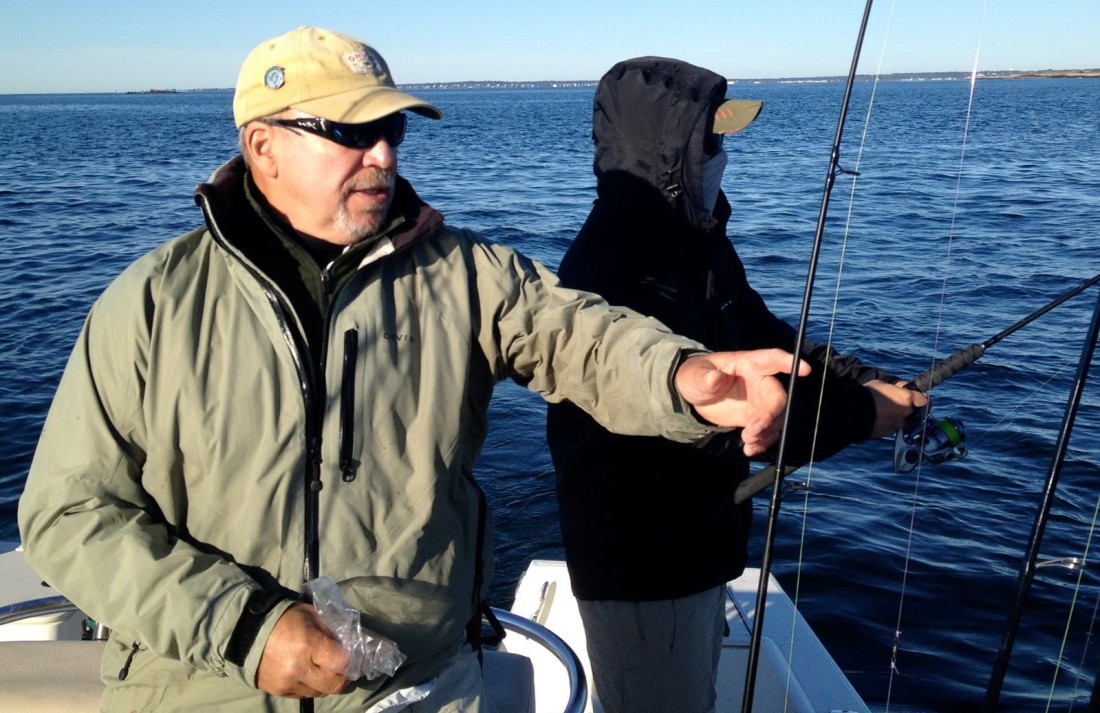 Captain Rene Letourneau runs On The Rocks Charters and is the most focused fisherman I’ve ever met. Last July, Captain Rene helped organize a Project Healing Waters event on Narragansett Bay. “This was a great day giving back to those who served. Unfortunately few fish were caught, but it was a great day.”

Rene’s message is in there with what he didn’t say.

Thomas Houde’s had so much good press, I feel like he may need an agent. “The first 44” Striper of 2018 proves to be the most memorable. Fishing with the RISAA kayak crew on a Wednesday night, late May, north of Conimicut Point. This fish caught me by surprise and half the line in my reel dumped off before I realized I had something special on the other end. Awesome fish to kick off the early season of 2018 and my second time fishing with the RISAA crew, fishing with new partners, Phouvieng (aka Noe), Joe Federico, Todd Treonze, Hank Pavluk and Christopher Cabral.”

Glenn Place is a lot of things to a lot of people and he serves them all well.  “So the most memorable time last year for me, one where I felt I had ‘arrived’ as a saltwater fly fisherman: that feeling that you get when you have made the right decision, line and fly selection, caught the right tide, and bushwhacked to the right spot was last year during the worm hatch. The tide was almost at high, the moon full  enough to see those wigglers in the water and swirls on the surface. The best part? I was the only one there! Bam, first cast, line screaming out of the reel, hand lined in. Bam. Second cast…I think you get the feeling of the night: seven stripers later…It doesn’t get any better than this, all within 1 ½ hours.”

Jimmy Chappell certainly catches a lot of fish and some pretty big ones. He’s racing to the canal or to Monahan’s or over to Newport depending on conditions and how much time he has. “Caught and released a new PB 50” striped bass. It was amazing watching this beautiful fish swim away to continue its journey. It was a day full of big fish with multiple fish over 45” being caught and released. This fish topped them all and is my current PB.”

Lawrence Thompson, whose picture I simply could not find, which is a bit embarrassing,  epitomizes the word fisherman. He’s the guy fishing earlier and later than the rest, fixing whatever breaks, taking the best fishy selfies. His best day came on September 1. “Another great day on the ocean, got a grand slam this morning, bonita’s, stripers, and blues! Not to mention fluke, seabass, scup and too many sea robins!  I was fishing around Weekapaug Point in my 14’ skiff on a beautiful day!” 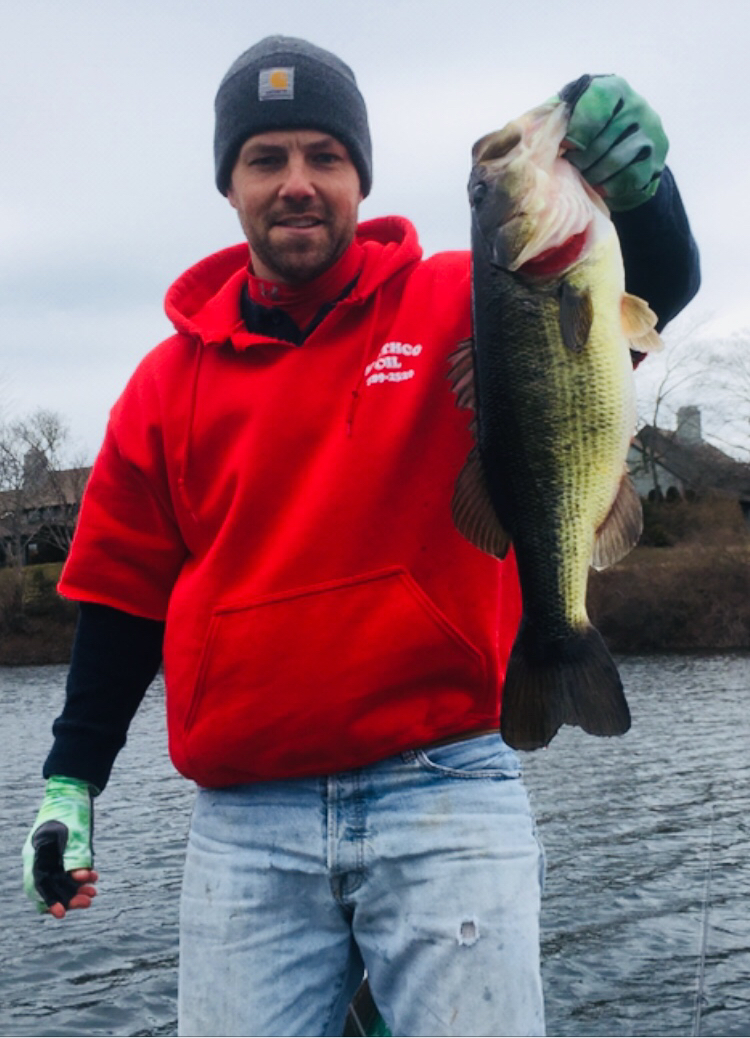 Dave Smith is a grinning, bass-catching machine. “I would say my biggest highlight was taking my daughter fishing and helping her catch her first large mouth bass. We/she caught bass at Rose Hill Golf Course on February 26th, 2018. My wife took the picture of Brooklyn and myself. It was an awesome moment and feeling seeing my daughter’s reaction to the fish when we got him to the shore. Believe it or not she actually kissed the bass before we released him back in the water to live another day. The wife was not a fan of Brooklyn kissing the fish, however daddy saw no real issue at all! It was a proud dad moment I must say. Not the biggest bass in the world but one of the most special fish caught that’s for sure.” 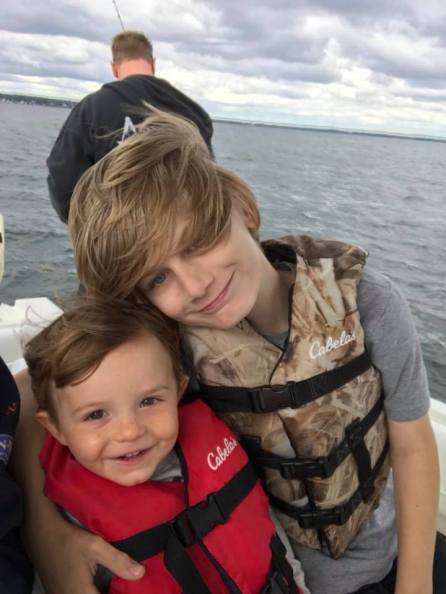 There’s two people I need to mention. Gabe Littlefield. Funny thing is, I’ve never met him. He’s the young son of friend of a friend but he needed help so I helped a little because everyone helped a lot and many didn’t know him either. Gabe’s Got This indeed.

Army SSG Michael H. Simpson of C Company, 4th BN, 1st Special Forces Group (Airborne). Funny thing is, I never met him either. He’s the father of two new young friends, Michael and Gabriel. They were the first shooting stars I ever saw up close. 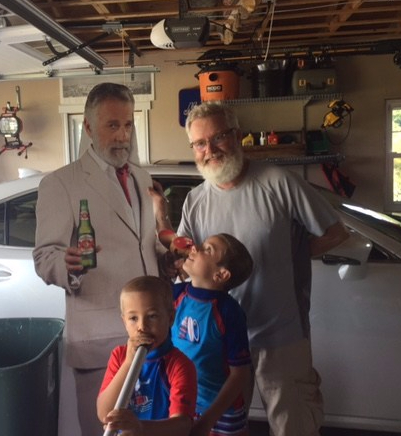 I doubt anything will surpass listening to those two brothers bragging about catching a giant striper with their patient grandfather, beside a picture of a proud soldier, under a pole flying a Special Forces flag, then mentally connecting the dots why their Dad wasn’t there. That moment was worth all the fish in the world to me.