In the midst of all we consume from radio, television and the printed word, there is a reminder of what we, as Clay Pell would say, “ordinary Rhode Islanders”, can do to shape an important piece of our favorite pastime or paycheck. The Atlantic States Marine Fisheries Council has scheduled a series of open and public meetings to take in our comments about proposed changes to allowable mortality levels of our sacred striped bass.  These changes are known as DRAFT ADDENDUM IV TO AMENDMENT 6 TO THE ATLANTIC STRIPED BASS INTERSTATE FISHERY MANAGEMENT PLAN.

While striped bass are currently listed as not overfished or experiencing overfishing relative to the proposed new reference points, there is concern regarding the female spawning stock biomass, which has declined significantly since 2006. In order to maintain a healthy population of bass and to secure their position in a food web of other local species, like herring, shad and squid, there is a need right now to prevent a decline in the female stock and as many of you understand, most of the big trophy bass harvested from Southwest Ledge this year were females. Our role, as the harvesters, is to read the proposals, attend a meeting and speak our minds. Reductions in harvest will likely be made at some level and the addendum recommends reductions in one of three different timeframes. Fishing mortality can be reduced to new proposed target levels by 25 per cent in one year, within three years by implementing a 17 per cent reduction in the 2015 fishing year or by instituting a 7 per cent sequential harvest for three consecutive years, which would begin in 2015. Your comments, recommendations and arguments will certainly help to shape the discussion and decisions.

There is also language to address limits on the taking of trophy-sized bass, a slot management plan and bag limits for both the recreational and commercial fishermen. Anyone who recalls the frustration of the striper moratorium from 1985-1989, should be interested enough to attend a meeting and bring along a younger fisherman who is enjoying a strong bass fishery, even if it has been generally lousy along the beach. This is our chance, our time, our opportunity to say what needs to be said and if we don’t participate, we have no room to talk smack next year.

Information on these important discussions and pending changes can be found on the web at http://www.asmfc.org/files/PublicInput/StripedBassDraftAddendumIV_PublicComment.pdf. The Rhode Island meeting will be held on September 17 at Corless Auditorium at URI’s Bay Campus, located on South Ferry Road in Narragansett. If you have questions, you can call Nicole Lengyel at the Division of Fish and Wildlife at 401.4223.1940.

There is some concern about our weather satellite coverage being a victim of old age and lazy, unconcerned legislators who have not found the time to fund new generations of our overhead observers. We have two sets of satellites providing critical weather data, the Geo Stationary and the Polar Orbitting. The two provide overlapping data, from which forecasters make short and long-term forecasts and sadly, both are listed on the GAO’s High Risk List. One backup is not due to be launched until 2017 and will be operational the following year with the following satellite not due to be launched until 2022 or 2023. So if it doesn’t blow up at lift off or implode shortly after entering its orbit, as they apparently are prone to do, we could face a gap of years in our weather forecasting. This gap will affect fishermen, farmers, travelers and thousands of closet weather geeks.

One apparent option to keep our forecasts accurate would be to purchase weather data from Chinese military satellites. This is all because a generation of martini sponges east of the Beltway could fund only hometown projects, an endless series of wars and a package of new roads bridges and schools in a few hundred countries, with the exception of our own and is at minimum, outrageous. Our own reps could demand no funding to repair the insult, the embarrassment, the bombed out cart way that is High Street, but we can consider writing a check to a foreign government so we can translate our morning Fewcha Cast from Mandarin. Good Lord.

On a better note, local waters are stuffed with anchovies, which should draw in bass and blues closer to the beach.  Anchovies are a significant food source for many ocean pelagics, like tuna and false albacore and if they stay around our beaches for a while, they may draw some of those big bass off the boulders as well.  That would be good since the local beach scene continues to be slow. Scup and black sea bass fishing is still strong and on September 1, the limit for scup increases to 45 fish per person per day. On the same day, the limit for sea bass will change from 3 fish per day to 7 fish per day, until December 31. It’s tough to mention the cool of fall in the midst of August heat but for those who have not made it to the ledge for a trophy bass or to The Dump, where tuna and wahoo are there to be caught, we can only hope that some change in weather, even if we can’t predict it, will bring some big fish closer to our beaches. 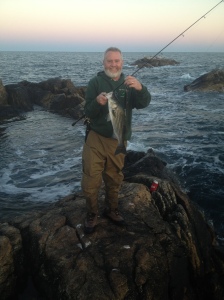